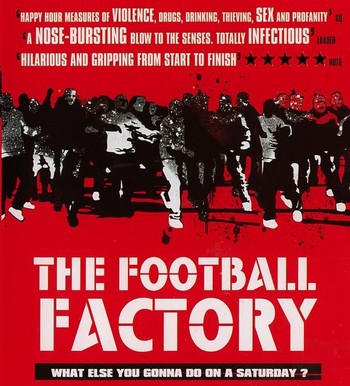 "There's nothing different 'bout me. I'm just another bored male approaching 30 in a dead-end job who lives for the weekend — casual sex, watered-down lager, heavily-cut drugs ... and occasionally, kicking the fuck out of someone."
—Tommy Johnson
Advertisement:

The Football Factory is a 2004 British film, based on the award-winning 1996 novel of the same name by John King, which was the first story of the Football Factory trilogy. It stars Danny Dyer, Frank Harper, Tamer Hassan, Neil Maskell, Dudley Sutton and Roland Manookian, and was directed by Nick Love (yes, that Nick Love).

The novel series centres around the extreme fans of Association Football, mostly the obsessed fans of British Footy Teams, to the point of forming large gangs (called "firms") in their neighbourhoods to seek out and attack fans of rival teams. Late-20s lowlife Tommy Johnson (Danny Dyer) is a member of a firm that supports Chelsea FC, and is desperate to get himself out of the lifestyle, despite his enjoyment of womanizing, cocaine and supporting his favourite team every week.

He struggles to try and escape it due to the persistence of the firm firm (deputy) leader Billy Bright (Frank Harper), whose life seems to be falling apart as much as Tommy's, and his best friend Rod (Neil Maskell), who shows no sign of being as damaged as the people around him. Johnson is convinced to give it up by his veteran grandfather Bill Farrell (Dudley Sutton), who plans to move to Australia with his best friend Albert, but cannot escape because of his depression over Albert's death and his grandson's wild and illegal activities.

After getting into a few bar brawls, Tommy realises that it's time to leave the hooliganism behind, but an incident with the brother of Millwall firm leader Fred (Tamer Hassan) leaves him in Millwall's wanted books. He also has to look out for the impressionable teenagers Zeberdee (Roland Manookian) and Raff (Calum McNab), who desperately want to be members of the Chelsea firm.

The Football Factory is somewhat of a cult classic to some, often being the Ur-Example of hooliganism and fanclub extremism in British soccer, along with The Firm and Green Street. The film led to having a spin-off documentary series called The Real Football Factories, in which a few actors from the movie visit areas around Europe that have similar football firms and fans like in this movie.

Meanwhile, the book series has two other stories in the same universe: Headhunters and England Away, which began the story of five other football-mad fans, who then meet with Tommy and the Chelsea firm to watch England play against Germany.

Tropes in the movie include: