Film / The Exorcism of Emily Rose 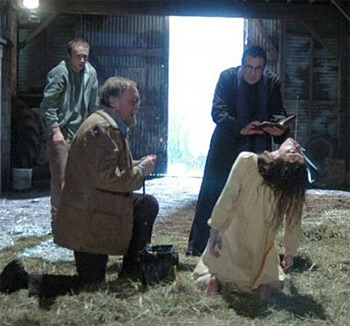 The Exorcism of Emily Rose is a 2005 horror/drama film directed by Scott Derrickson that is loosely based on a Roman Catholic Church exorcism in 1976, performed on Anneliese Michel

. It concerns the story of Emily Rose (Jennifer Carpenter), a 19-year-old college student who suffers problems of a sufficiently ill-defined nature, that medicine and later an actual exorcism fail to cure. The movie refuses to make an explicit statement on whether the problems are psychotic or demonic, and whether the medicine and exorcism are helping or interfering with one another. Her questions unanswered, Emily eventually dies from self-injury and malnutrition.

The story is told in flashbacks after Father Richard Moore (Tom Wilkinson), the priest who performed the exorcism and oversaw Emily's care, is arrested on charges of negligent homicide. The flashbacks are told from various perspectives, each providing a spiritual or medical reason for her condition and death. Father Moore is represented by an agnostic attorney, Erin Brunner (Laura Linney), and is prosecuted by a churchgoing Methodist, Ethan Thomas (Campbell Scott). Over the course of the trial, the jury and audience is asked to consider the possibility that Emily may have been possessed, and Erin is forced to confront her own beliefs regarding spirituality and morality.