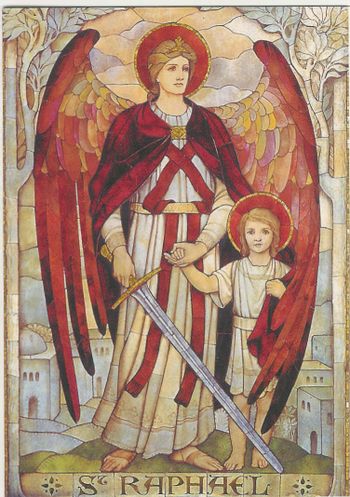 The Archangel Raphael is one of the seven Archangels mentioned in The Bible, specifically in the Book of Tobit (which not all religious groups consider to be canon). He is seen as a healer and guide, acting as an assistant to Death, as his Traveler persona, on some occasions. He is also seen in the Islamic faith as the trumpet blower for death, replacing Archangel Gabriel. Along with Gabriel and Michael, Raphael is one of the three archangels recognised by the Catholic Church, while Michael is the only archangel named in Biblical books that everyone considers canon.note  In the Judaic mystical system of the Kabballah, and in the Christian mystic school of Rosicrucianism, a fourth Archangel, Auriel, is named and honoured.

Subtrope of Celestial Paragons and Archangels. See his brethren in Archangel Azrael, Archangel Michael, Archangel Gabriel, Archangel Uriel, and (possibly) the Fallen Angel version in Archangel Lucifer, aka Satan. Also take a look at Our Angels Are Different. Contrast Asmodeus, his Arch-Enemy in the source material. See also The Medic.