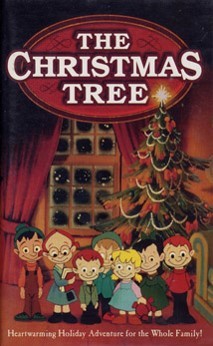 The Christmas Tree is a 1991 animated Christmas special directed by Flamerion Ferreira. It was distributed on VHS by Family Home Entertainment, and later on DVD by GoodTimes Entertainment.

It takes place in an orphanage run by the evil Mrs. Mavilda. She steals the orphanage's funds and tricks the mayor into thinking she's a good manager. The kids are so miserable they latch onto a pine tree as a mother figure. Things begin to change when a new family moves to town, and the mayor assigns the mother, Judy, to a position as Mrs. Mavilda's assistant. She and her two children live at the orphanage while their husband/father must live elsewhere for his new job. Judy takes the orphans under her wing and tries to make life better for them. When Mrs. Mavilda decides to frame Judy for a crime in order to have her removed, the children make a desperate appeal to Santa Claus for help.

This animated special provides examples of: