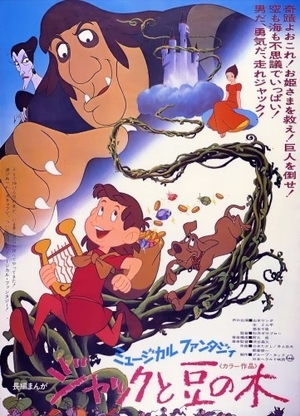 A Japanese animated film from The '70s directed by Gisaburo Sugii who was an animation director for Belladonna of Sadness and later directed Night on the Galactic Railroad, the 1984 Glass Mask TV series, and Street Fighter II: The Animated Movie. It is, of course, a re-imagining/expansion of the fairy-tale "Jack and the Beanstalk". The film starts out familiarly enough... Jack is tricked into trading his cow for magic beans, the beans grow a beanstalk over night...and then it gets interesting. Jack's dog, Crosby, saves a mouse wearing a pink princess dress from a bird, and she leads Jack and Crosby to the top of the beanstalk, to a magical cloud kingdom. There, Jack meets Princess Margaret, who seems oddly calm about marrying an ugly, dumb giant and having a Wicked Witch for a mother-in-law. Of course, it's revealed that the witch wants to be queen of the cloud kingdom and has turned the rest of the royal family and servants into mice, who beg Jack to save their princess.

Released in Japan in 1974 as the debut production for Group TAC, it received an English-language dub and distribution through Columbia Pictures in 1976 with Billie Lou Watt of Astro Boy fame as the voice of Jack, and aired occasionally on U.S. cable television (particularly HBO) during the 1980s.