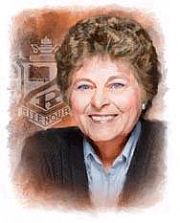 Billie Lou Watt (June 20, 1924 - September 7, 2001) was a famed actress in animation, television and theater. She was born in St. Louis and attended Ritenour High School while forming the desire to become a professional actress. When she graduated from college, she made it into some of Broadway's most popular plays at the time, including King Of Hearts and Little Women.

She also got into animation, where she played the leads and helped write the scripts for some of the anime adaptations of Osamu Tezuka's works, including Astro Boy and Kimba the White Lion. When she returned to acting as herself, Billie got her longest TV role as Ellie Harper Bergman in Search for Tomorrow, from 1968 to 1981, while occasionally doing voice acting.

She died of lung cancer in New York City, but her legacy lives on as one of the first American actresses in anime.