Literature / I Want to Eat Your Pancreas 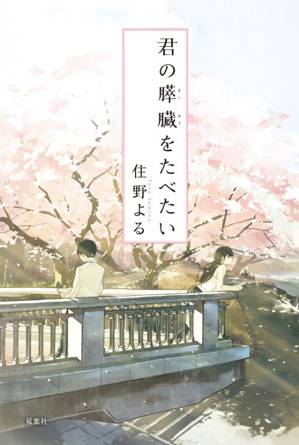 It's never a coincidence. It's a choice. note Art by loundraw.
Advertisement:

Despite its creepy name, I Want to Eat Your Pancreas is actually a sad story focused on the male protagonist, who is initially referred to as "I" while his real name remains a secret for much of the narrative, and Sakura Yamauchi during their high school life. The main character finds a book with the title Disease Coexistence Journal, which belongs to Sakura, and learns that Sakura is diagnosed with pancreatic cancer, leaving only a year to survive. After that meeting, these two people who never talked to each other before begin to spend their remaining time together, and Sakura's influence on the protagonist starts to slowly change him for the better. This newfound relationship, however, does not go unnoticed by those around them, not least Sakura's wary best friend Kyoko.

A sequel novel, To My Father and to Someone in My Memories (Chichi to Tsuioku no Dareka ni) was given out in certain theatres with the animated film's release in 2018, and tells the story of the protagonist's daughter Fuyumi as she finds out about the story of her father and Sakura.