This page contains unmarked spoilers for the book series. You Have Been Warned! 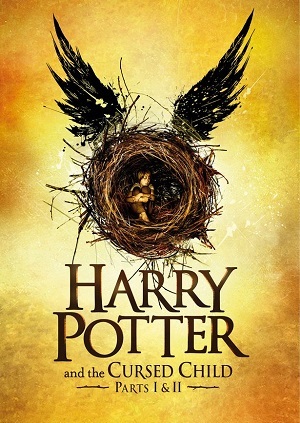 Harry Potter and the Cursed Child is a stage play with a script by Jack Thorne (based on a story by Thorne, J. K. Rowling and John Tiffany) and directed by Tiffany, with a musical score by Imogen Heap. Notably, Rowling considers this play to be Canon and the official eighth Harry-focused instalment in the Harry Potter franchise. It debuted in the West End on July 30, 2016; a run on Broadway debuted in 2018, while a third run at Australia's Princess Theatre started in 2019.

Set after the seventh book's "Where Are They Now?" Epilogue, Harry is now a 37-year-old Ministry of Magic employee struggling to deal with his past, while Albus Severus, the second of his three children, tries to live up to his family name.

It was announced in early 2016 that the play's script (not a novelization of the play) would be published. It was released that July 31 (the same day as Rowling and Harry's birthdays).

Due to a few major plot points being introduced very early on, some spoilers will be unmarked. Once again, You Have Been Warned!