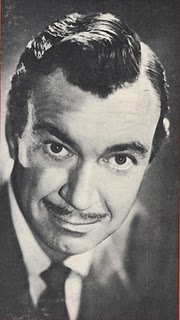 A face fitting of the name Ravenscroft if I ever saw one.
"I'm the only man in the world that has made a career with one word: Grrrrreeeat!"
— Thurl Ravenscroft on his most famous character, Tony the Tiger
Advertisement:

Thurl Arthur Ravenscroft (February 6, 1914 — May 22, 2005) may have had one of the greatest voices to grace humankind. Born in Norfolk, Nebraska, Thurl later left for California in his twenties to study at the Otis Art Institute and pursue a life of show business; after being flooded with job requests stemming from his auditioning at Paramount as a studio singer, he eventually had to quit the former. He said he originally wanted to apply his unique voice for opera, but instead he found his calling doing radio work and singing bass in a barbershop quartet called The Mellomen. This group received lots of gigs singing jingles for commercials for products such as wine and breakfast cereals, and it was at this point that Thurl received his most famous job — voicing the Frosted Flakes cereal mascot Tony the Tiger, a character he voiced for his entire life (let's be honest, he was grrrrreat at it!).

Thurl Ravenscroft is a sort of paradox. While his deep voice was perfectly capable of shaking gods and chilling audiences, Thurl preferred to provide children's fare, and his voice also possessed a very friendly vibe to it, much like a giant teddy bear. In 1966, he was offered a job by Dr. Seuss and Chuck Jones on How the Grinch Stole Christmas! to provide his most famous song, "You're a Mean One, Mr. Grinch", and provided his voice in many other Dr. Seuss animated shorts as well. Along with his collaborations with breakfast companies and Dr. Seuss (and his later notable part as the vacuum-cleaner Kirby in The Brave Little Toaster), Thurl also had a notable partnership with Walt Disney, providing many a voice in his animated films, but most famously for Disneyland, lending his voice for such rides as Pirates of the Caribbean, The Haunted Mansion (his is that singing bust often confused with Walt Disney), The Enchanted Tiki Room (both the Walt Disney original and the infamous Under New Management version), and even It's a Small World. He also played the Russian cat in The Aristocats. He was even the voice of the Disneyland Railroad calling the guests to the trains!

A devout Christian, Thurl Ravenscroft sang frequently for his church choir, and had even produced a few Gospel albums during his career. He died in his home at the age of 91 in 2005 from prostate cancer. Due to his legacy, Thurl was inducted as a Disney Legend in 1995.

, to which Thurl himself contributed.