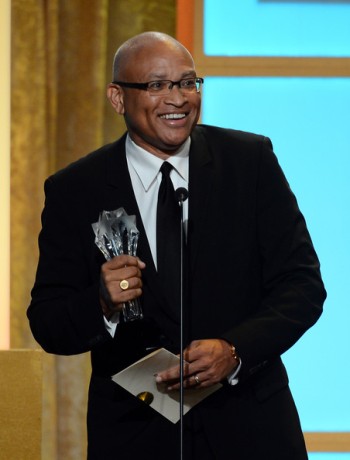 Wilmore accepts a Critics' Choice Television Award for The Daily Show in 2013.
Advertisement:

As a writer, he has worked on several series including In Living Color!, The Fresh Prince of Bel-Air, Sister, Sister, and The Jamie Foxx Show, which he also produced. He also co-created The PJs with Eddie Murphy, The Bernie Mac Show with Bernie Mac, and Insecure with Issa Rae.

From 2006 to 2014, he was a contributor to The Daily Show, where he was addressed as the "Senior Black Correspondent"note The joke being that, until Wyatt Cenac joined the show, Wilmore was the only black correspondent, offering humorous insights on race relations in America.

In May 2014, Comedy Central announced he would have his own Daily Show spinoff, The Nightly Show with Larry Wilmore (originally titled The Minority Report with Larry Wilmore), taking the place of The Colbert Report now that Stephen Colbert is hosting The Late Show in 2015. The first episode aired January 19, 2015. The show ended its run on August 18, 2016.

In April 2016, Larry hosted the 2016 White House Correspondents Dinner (the last of President Barack Obama's administration), during which he jokingly accused Republican presidential candidate Ted Cruz of being the Zodiac Killer and that Cruz planned to go on a murder spree if elected.

In 2020, he returned to late night on Peacock hosting a show simply titled Wilmore.