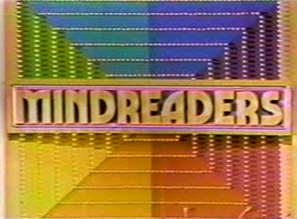 Two teams (one all-male, the other all-female), each consisting of three civilian contestants and a celebrity captain, competed. One by one, the celebrity captain predicted how each of his/her teammates answered a personal question. Predicting correctly won $50, but predicting incorrectly gave $50 to the other team, and the other team's captain could mindread the remaining teammates. This process was repeated with a new question for the opposing team, and the first to get $300 won the game.

The bonus game was played in two parts:

Little remembered and little loved, it's generally seen as Goodson-Todman's worst game show (although Goodson himself considered the 1954 flop What's Going On? to be the worst). Mindreaders debuted on August 13, 1979, replacing the short-lived All-Star Secrets in the Noon timeslot. It was originally given a 26 week order, but performed so poorly that it was canned four weeks early, on January 11, 1980. It was replaced by Chain Reaction the following Monday.