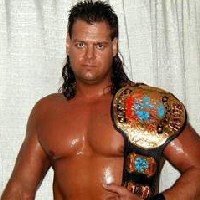 "Awesome is what they say
All his victims feel the pain
Trapped with an Awesome Bomb
You go down and you never come up"
Advertisement:

Michael Lee Alfonso (January 24, 1965 – February 17, 2007) was an American Professional Wrestler from Tampa, Florida known as Mike Awesome and, in FMW in Japan, The Gladiator. He started in 1989 in Florida and was a masked Jobber for WCW as The Pro. He jumped to FMW in 1991 and became a regular there. He made his ECW debut defeating Randy Starr at ECW Holiday Hell on December 26, 1993. He continued to compete in FMW, though he made a few more appearances in ECW in 1994, including his famous match with JT Smith at ECW The Night the Line Was Crossed, where Smith surprised everyone by pinning Awesome with a small package after Awesome had crushed Smith against the guardrail. He returned to ECW in 1998, resuming his big feud with Masato Tanaka to great acclaim. He surprised everyone by making his WCW debut on the April 10, 2000 episode of WCW Monday Nitro while he was still the ECW World Heavyweight Champion

. He stayed with WCW until it closed and, after WWE bought out WCW, he was brought in for the InVasion/Alliance angle, an experience he hated. He was released in September 2002 and would spend time in TNA, Pro Wrestling NOAH, MLW, All Japan Pro Wrestling, and some independents. His last in-ring appearance was his match with Tanaka at ECW One Night Stand on June 12, 2005. He announced his retirement in 2006 and started a career in real estate. Sadly, he was found dead of suicide on February 12, 2007. (See Would Hit a Girl below.) Among his in-ring achievements, he was a 2x ECW World Heavyweight Champion, a 1x ECW World Tag Team Champion

with Raven, a 1x WWE Hardcore