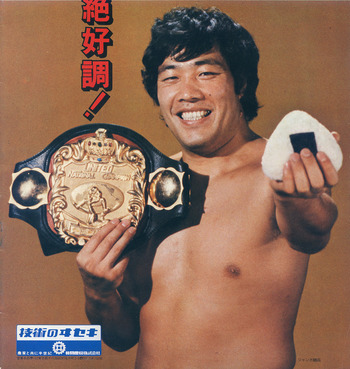 Tomomi Tsuruta (March 25, 1951 – May 13, 2000) was a Japanese professional wrestler who competed from 1973-1998 (retiring in 1999) as Jumbo Tsuruta. The first son of All Japan Pro Wrestling, he was among the most popular and remains among the most respected members of the third generation of puroresu.

Inspired as a teenager by the Tokyo Olympics, Tomomi made it his life's goal to compete in the Games. A star athlete in high school, he entered college with the intent to play basketball before realizing that Japan's chances of reaching the Olympics in that sport were fairly slim. So he pulled a complete 180 and pursued amateur wrestling. After remolding his body to that of a wrestler, and undergoing a rigorous training regimen, Tsuruta dominated the national collegiate wrestling circuit in 1971 before qualifying for the Olympics. While he didn't win a single match, Tomomi had realized his dream. Encouraged by to go professional in order to promote amateur wrestling by association, and spurred by the death of his father, Tomomi began the next chapter of his life.

After becoming the first signing of AJPW, he debuted as Tommy Tsuruta in 1973, in the Funk family's promotion in Amarillo, Texas. Here, he was among the first Japanese wrestlers to get over as a face in the United States. He returned to debut for AJPW that autumn. Shortly afterward, he was rechristened Jumbo, and the rest was history.

How did he fare? Well, it was complicated. On one hand, Jumbo was one of the most prodigious talents in pro wrestling history. He was such a natural that trainer and then-NWA champion Dory Funk Jr. gave him a shot at his title eight weeks after his debut match. Jumbo was instantly made AJPW's #2 wrestler upon his return, a position which he would hold for nearly a decade. On the other hand, though, there eventually came a point where Jumbo's reputation began to suffer for this. Jumbo was consistently given shots at an NWA title he would never be politically favored enough to receive; one could say that, after the exceptionalist narratives that Rikidozan, Giant Baba, and Antonio Inoki had upheld, Jumbo was the first Japanese wrestler whose image became tied to his failure. While he would finally be allowed to close this arc of his career by winning the AWA title in 1984, this was partially responsible for how slow the transition from Baba to Jumbo as company ace wound up being. However, due to a pair of upheavals in the mid-to-late 1980s, Jumbo would radically reinvent himself, and create perhaps his true legend in the process.

When an unprecedented talent influx from NJPW, led by Riki Choshu, invaded AJPW in 1985, Jumbo fought them on the front lines week after week, alongside his partner and successor as company #2, Genichiro Tenryu. This rejuvenated the entire company, Jumbo included, but it arguably did even more for Tenryu. Which is why, a few months after Choshu and most of his boys returned to NJPW in 1987, Tenryu split from Jumbo to form what would become the Revolution stable.

The result was one of the greatest heel turns in puroresu history. Jumbo's character had been an aggressive one during the Ishingun era, and there had been glimpses of his mean streak earlier on, but Tenryu's challenge to his dominance turned Jumbo into, by the standards of AJPW, The Bully. Through a three-year storyline which gradually but masterfully established Tenryu as his equal, and possibly his successor, Jumbo ended the decade as one of the best wrestlers in the world. However, Tenryu's departure in 1990, which also led a significant chunk of AJPW's native talent to follow and join his own promotion, left Jumbo as the only native main-eventer in the company.

That is, until Mitsuharu Misawa publicly unmasked and challenged him. After one of the most legendary matches in wrestling history, in which Misawa did the unthinkable and pulled out a surprise win, Jumbo went nuclear. The ensuing feud between Misawa's Super Generation Army faction, and Jumbo's Tsuruta-gun stable, battled for supremacy in a two-year turf war that made AJPW the most acclaimed wrestling promotion in the world, while establishing young stars such as Toshiaki Kawada, Kenta Kobashi, and Akira Taue.

Sadly, it was a story that Jumbo would be unable to end on his own terms. Identified as a hepatitis carrier in 1985, his disease finally struck just in time for summer 1992. He would manage to work a couple tours later in the year, but did so with great difficulty. By the time he was able to return to the ring, the atrophy was shocking and saddening. However, Jumbo would continue to work part-time for the company for much of the decade, while returning to school to attain a coaching degree. Retiring in 1999, Tomomi Tsuruta moved to America to start a new life as a teacher. Unfortunately, he would not get a chance to see that life through, and died after a liver transplant in 2000.

Among his in-ring achievements, Jumbo was the inaugural and 3x All Japan Pro Wrestling Triple Crown Heavyweight Champion

. He also won AJPW's annual singles and tag tournaments, the Champion Carnival and World's Strongest Tag Determination League, two and five times respectively; the latter is a record only since matched by Kobashi. He was inducted into the Wrestling Observer Newsletter Hall of Fame in 1996.