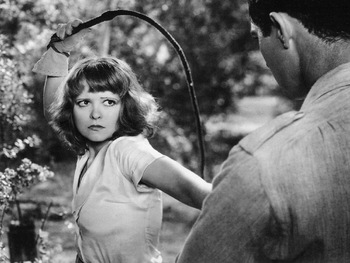 Call Her Savage is a 1932 Melodrama Tearjerker film directed by John Francis Dillon and starring Clara Bow in her next-to-last film role.

Nasa Springer (Bow) is the granddaughter of a rich Texas railroad magnate. Her mother Ruth (Estelle Taylor) is trapped in a loveless, sexless marriage to Pete Springer (Willard Robertson), who cares more about business than her, and as a consequence Ruth is having a long-term love affair with Ronasa (Weldon Heyburn), a local Native American. Nasa is a wild child, who can't be tamed by her stern father, and seems to only listen to Moonglow (Gilbert Roland), a local "half-breed". Her father sends her off to a women's college in Chicago, with hopes of civilizing her; when this fails he attempts an Arranged Marriage with an affectionate but dull young blueblood whose family ties would help the Springer business. She refuses, and instead marries playboy Larry Crosby (Monroe Owsley), only to find that he doesn't love her at all, and only married her to spite his cheating girlfriend, Sunny (Thelma Todd).

Nasa lives off her husband's money for a while but eventually they divorce and she is reduced to poverty. She is further reduced to prostitution to support her baby, who is promptly killed by a fire in their tenement. Still further trials and tribulations await Nasa before she finds out the truth about her past.

Call Her Savage was the first film in a two-picture deal for Bow with Fox, after she'd retired from the movie business after a nervous breakdown. This film and her next, Hoop-La, met with mixed critical receptions, but Bow's performances, especially this one, impressed everyone in Hollywood. She got contract offers from almost every studio but instead retired from the movies for good at the age of 28. Besides Bow, this film is remembered for its appallingly racist ending (see The Reveal below), and for how exploitative and trashy the film was, with sexual content that was shocking even in The Pre-Code Era.