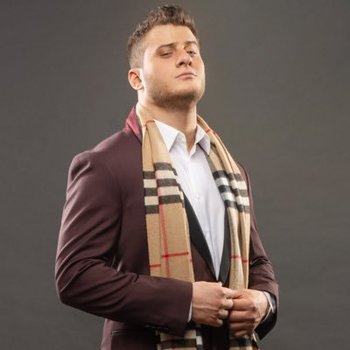 Better than you.
Advertisement:

Friedman was trained at the Create-A-Pro Wrestling Academy by Brian Myers (Curt Hawkins) and Pat Buck, and went on to work for Combat Zone Wrestling, capturing the CZW Wired and CZW World Championships in his tenure there. In Major League Wrestling from 2017 to 2020, he was the inaugural World Middleweight Champion and a one-time World Tag Team Champion (with Richard Holliday) and formed his own stable dubbed the Dynasty (with Richard Holliday, Hammerstone, and Aria Blake). He's also known for his runs in WrestleCircus and AAW Wrestling.

At AEW, Friedman was the "best friend" of Cody Rhodes and his Nightmare Family until he turned on the former. Later, he would similarly manipulate Chris Jericho to join Jericho's Inner Circle stable, eventually forming his own stable, The Pinnacle.

"THESE TROPES ARE BETTER THAN YOU, AND YOU KNOW IT!"