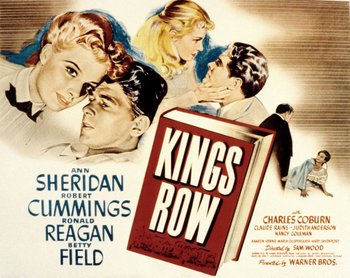 "Where's the rest of me?"
— Drake McHugh (Ronald Reagan)
Advertisement:

The film deals with life in the small Midwestern town of Kings Row around the turn of the 19th-20th centuries. Parris Mitchell (Cummings) is a serious young man who dreams of being a doctor. His good friend since childhood, Drake McHugh (Reagan), is a rich young man who enjoys playing The Casanova with the girls of Kings Row. But there are dark things going on behind the scenes in Kings Row. Parris studies medicine with Dr. Alexander Tower (Rains), but Dr. Tower's wife never leaves her second-story room. Parris courts Dr. Tower's daughter Cassandra (Field), but eventually Dr. Tower locks her up as well. Meanwhile, Drake is taking carriage rides with Louise Gordon, but Louise's father, Dr. Henry Gordon (Coburn), hates Drake and won't let him near Louise. And there are dark rumors about Dr. Gordon's medical practices.

Kings Row is remembered mostly for being one of the best movies to feature future President Ronald Reagan, who spent most of his film career trapped in the B-Movie ghetto. Kings Row could have been the start of bigger and better things for Reagan's movie career, but he got drafted into the Army, and the moment passed. "Where's the rest of me?" became his Signature Line, and it was the title of his first autobiography.