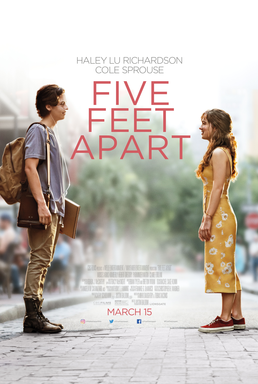 "Let me guess. You’re the kind of guy that ignores the rules because it makes you feel in control. Am I right?"
Advertisement:

Five Feet Apart is a 2019 American romantic drama film directed by Justin Baldoni and written by Mikki Daughtry and Tobias Iaconis. The film stars Cole Sprouse and Haley Lu Richardson as two teenagers suffering from cystic fibrosis who fall in love, but are hindered by always being required to keep a certain distance away from each other to prevent infection.