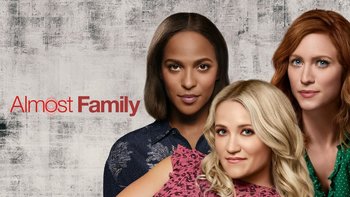 From right to left: Julia, Roxy and Edie.
Julia Bechley (Brittany Snow) is shocked to learn that her father, fertility specialist Dr. Leon Bechley (Timothy Hutton) has conceived around 100 children using his own sperm by in-vitro fertilization. To cope as her father is indicted and she's fired from the clinic where he worked, Julia bonds with two of the half-sisters whom she's just met as a result: Edie Palmer (Megalyn Echikunwoke), who she's been friends with prior, and former Olympic athlete Roxy Doyle (Emily Osment). Both of them also have their own issues, and together all three cope while even more secrets come to light. Based on the Australian series Sisters, it aired on FOX.
Advertisement: