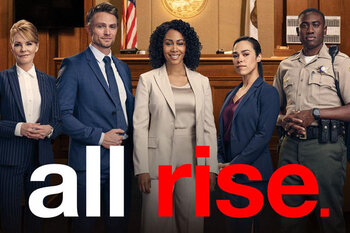 ...for the honorable Lola Charmichael
All Rise is an American legal drama television series created by Greg Spottiswood

which premiered on CBS in 2019. Beginning with its third season, the show has moved to OWN.
Advertisement:

Lola Charmichael is a dedicated lawyer who trades in her job as a prosecutor for a robe as she becomes Los Angeles' first black female judge. Having worked her whole life for justice both social and criminal, Charmichael sees her career change as an opportunity to finally implement the changes she always dreamed of achieving.

What follows is a exploration into the cases and personal lives of those working in LA justice system inclding Judge Charmichael, her Childhood Friend LA prosecutor Mark Callen, public defender Emiliy Lopez, and bailiff and aspiring lawyer Luke Watkins.

This Series Shows Examples of...