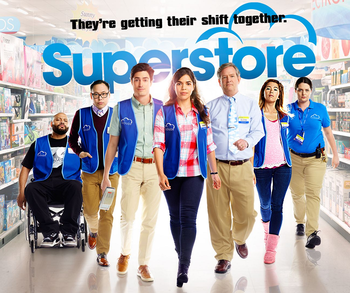 From left to right: Garrett, Mateo, Jonah, Amy, Glenn, Cheyenne and Dina. Not pictured: Sandra.
"Tomorrow is gonna be just like today, and I know that because today is just like yesterday."
— Amy, "Pilot"
Advertisement:

It follows a group of employees working at a fictional big-box store and Fictional Counterpart of Walmart called "Cloud 9" set in St. Louis, Missouri, and all the various antics they get up to while evading bizarre customers and demanding upper management. Ferrera plays Amy Dubanowski, the store's weary floor manager, who has to wrangle the various sales associates (a core group comprised of awkward business school dropout Jonah (Feldman), snippy Mateo (Nico Santos), ditzy high schooler Cheyenne (Nichole Sakura), and playful and sarcastic Garrett (Colton Dunn), as well as many others), the store's wimpy and religious manager Glenn (Mark McKinney), and the stern and no-nonsense assistant manager Dina (Lauren Ash). The series portrays many aspects of working-class life both for comedy and drama (although mainly the former).

The series debuted on November 30, 2015 on NBC. In December 2020, NBC announced that the show's sixth season would be its last; the series finale airing on March 25th, 2021. Following news of the show's cancellation, a spinoff starring Cheyenne and her husband Bo (Bo & Cheyenne) was also reported

to be in development.

And have a heavenly day!