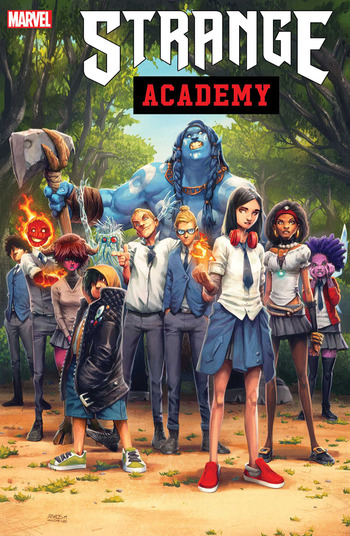 A 2020 Marvel Comic written by Skottie Young, with art by Humberto Ramos. Think of it like Hogwarts in the Marvel Universe...but weirder.

Emily Bright's magical powers first appeared when she was a baby and they have only gotten stronger. Now that she's a teenager, after an encounter with a living (and angry) tree, a Magic Librarian named Zelma Stanton asks Emily to join the new Strange Academy in New Orleans, the first school for up-and-coming magic users.

At the school, Emily meets her fellow students Shaylee Moonpeddle (a half-fairy), Alvi and Iric (the twin Asgardian sons of The Enchantress), Guslaug (a young Frost Giant), Doyle Dormammu (the son of Dormammu), Zoe Laveau (a practioner of Voodoo and descendant of Marie Laveau), Calvin Morse (and his enchanted leather jacket), Dessy (full name: Despair, a demon from Limbo), German (who can create animal projections), and Toth (a half-Crystal Warrior and half-Man Thing from Weirdworld).

She also meets her teachers: Doctor Voodoo, the Ancient One, Shaman, the Scarlet Witch, Daimon Hellstrom, Nico Minoru, Magik, Loki, the Mindful One, and Doctor Strange himself. And at the end of their first day at school, Strange gives them all the same advice: "Try not to die."