Literature / The Candidates (based on a true country) 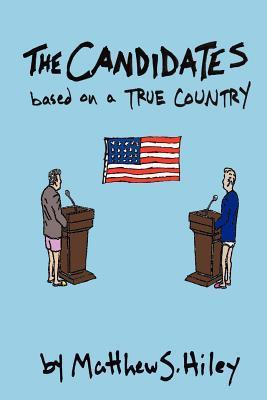 Hatchet: "You know, shit-stain, when we win this election, I'm going to have you and all of your dope-smoking friends rounded up and sent to Guantanamo Bay. Everything you and your fag buddies stand for makes us a weaker nation. We will annihilate you and make you shower, you stinky hippie."
Moondog: "You don't scare me, Webster. You'll never get that chance. When we get elected we're going to pass a law that, in order for a Republican to keep their gun, they must commit suicide with it."
Hatchet and Moondog, setting the tone for the novel at large
Advertisement:

The race for the US Presidency is on, and both candidates are as unqualified as they are hypocritical, as selfish as they are arrogant. Running for the Democrats is Harry Pinko, a lazy stoner who's never held a real job in his life and whose only real political goal is to Troll rich people. His worthy opposition among the Republicans is Skip LaDouche, an alchoholic Corrupt Corporate Executive who enjoys shooting things. So pretty much like every election year, really.

However, unexpected complications arise as both men turn out to have had an affair with media personality Kimmy Faimwhorre, who threatens to go public with the details (and a sex tape) in order to fuel her own career. Suddenly, the liberal and the conservative have at least one thing in common - they absolutely need to silence everyone who knows about the potential scandal, including each other.

What follows is many failed assassination attempts and comedy that's of a shade of black rarely seen outside of theoretical physics experiments.

The Candidates (based on a true country) is a novel by Matthew S Hiley.