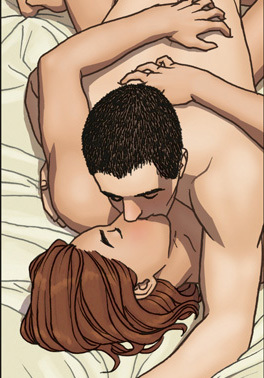 Now, where would this fall on the Kinsey Scale?
"Actually I prefer the term... inhuman."
— Deacon
Advertisement:

A completed webcomic by author Alex Woolfson and artist Winona Nelson, which ran from March 2011 to March 2012. One of four finalists for the 26TH Annual Lambda Literary Awards in the "Graphic Novel" category. It can be found here

It was supposed to be a routine "clean-up" mission on the isolated colony Da Vinci Four, but Deacon, a prototype android soldier, has failed spectacularly. Not only did he disobey orders, letting a 19-year-old business liability named Jeff survive, he also attacked and killed those who were sent to help him. Now, the brilliant and uncompromising robopsychologist Clarice Maven has been summoned by the Corporation to determine why.

With Deacon at her absolute mercy, Maven will find out exactly what happened between the android and this boy—and she will use her terrible power to make sure Deacon never fails the Corporation ever again.