Webcomic / And It Don't Stop 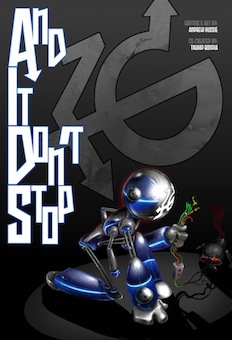 Your anger is what blinds ya,
Grinds your mind and it don't stop.
The flow of rhyme's what binds ya
To the true art of Tech-Hop.
— Ice Cream Man, during his confrontation with previous champion Stelth
Advertisement:

And It Don't Stop is a 39-page webcomic project (40 including the cover) created by Andrew Hussie, most known for his MS Paint Adventures, and Tauhid Bondia. It follows the newcomer battle rapper "Ice Cream Man" through a freestyle rap/robot battle competition. The story doesn't go any deeper than this, but the artwork is quite well done.

A six-page prequel by Tauhid can be read here