Characters / The King of Fighters: The NESTS Chronicles

Characters in The King of Fighters debuting in the NESTS Chronicles (from KOF '99 to 2002; this includes 2002: Unlimited Match) will be listed here.

The King of Fighters 2002 / Unlimited Match 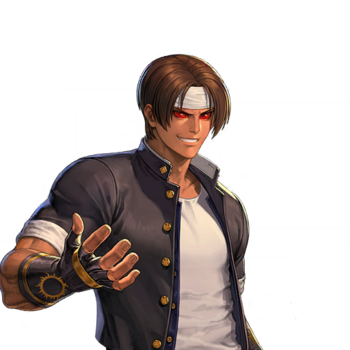 Fighting style: Kusanagi-style ancient martial arts
Voiced by: note Mitsuo Iwata (2002-2003), Masahiro Nonaka (Sky Stage)
Playable in: note 2002/UM, 2003
KUSANAGI is yet another of NESTS experiments, this time, one that transplanted the power of Kusanagi's flames into a cloned body. He's a lot more belligerent and rude than Kyo and his only goal is to fight others. He appears in 2003 as an illusion from the Yata Mirror created by Chizuru Kagura while she was under the possession of Botan. He exists to test the strength of the contestants in the 2003 tournament.
Nameless 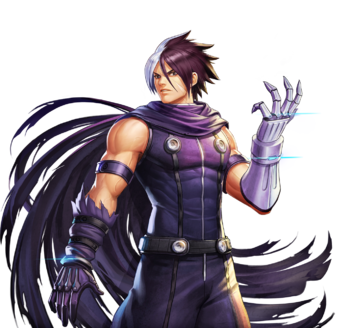 Fighting style: Personal style
Voiced by: note Daisuke Ono
Playable in: note 2002:UM
The 9,999th clone of K' created on NESTS' Deimos base on Mars as part of Project Zhe. The objective was to combine both K' and Kyo Kusanagi's flames and inject the combined DNA into various test subjects. Nameless is the only survivor of the project.
Nameless knew only suffering as a test subject, and had to watch as his "brothers" (other test subjects just like him) were horribly killed or injured by the experiments. One day, after he suffered severe injuries, he saw a beautiful girl named Isolde near the infirmary who was a part of the Anti-K' project and was given the ability to control ice. He fell in love with her, and suddenly gained a newfound resolve to endure the experiments in order to see her again. The scientists noticed the connection, and after realizing that wielding the flames required strong willpower, they changed Nameless's training regimen to endurance tests. They allowed him to visit her to bring out both of their true potentials. Unfortunately, Isolde died during a test, but rather than waste her progress, the NESTS scientists grafted her DNA into Nameless' glove, finally allowing him to control the combined flames. Deemed a success, Nameless became an assassin for NESTS, tasked with hunting and disposing of any traitors to the organization. When he cornered one of his targets, he revealed to Nameless the truth about Isolde as a last-ditch attempt to save his life. Burdened with this knowledge, Nameless eliminated the target and decided to continue working his way up in the eyes of NESTS, hoping this will convince them to restore Isolde.
Advertisement: 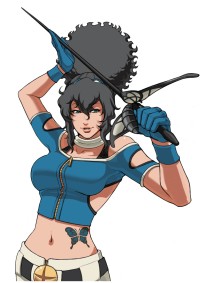 Voiced by: note Kaori Minami (2000 only), Haruna Ikezawa
Kula's caretaker and head of the Anti-K' project. Skilled with a rapier, although she's never been playable.

A young woman part of the "Anti-K'" project conducted by NESTS with the power to control ice. However, her abilities were deemed to be lacking and she was marked as a defective experiment. She first met Nameless in the infirmary after he had suffered severe injuries in a mock battle to assess combat data. Meeting him greatly improved her impaired capabilities and thus she was allowed to see him again on a regular basis to nurture her powers.
Unfortunately, Isolde died during one of her tests. NESTS did not want to waste their progress on Isolde, so her essence was infused into the glove Nameless wears to help control his flames. Nameless learned of this from interrogating a fugitive of the syndicate and hopes working for NESTS will allow him to restore her to her original body.
It is said Isolde does live on in Nameless' glove, with frequent apparitions of her whenever he uses his own powers.

Igniz's girlfriend/lover. She can be seen in his win pose after Igniz defeats anyone related to NESTS. She apparently has the ability to translocate herself. Last seen at Ron's side in the Psycho Soldier team's XI ending.

The eponymous leader of the NESTS syndicate, he is a no-nonsense type of man. Less than pleased with Krizalid's failure and the betrayal of Clone Zero, he personally oversees the 2001 tournament. Unfortunately, he's done in by the machinations of Igniz, his son, and Misty, his secretary, the former of whom kills him unceremoniously right before the finals. 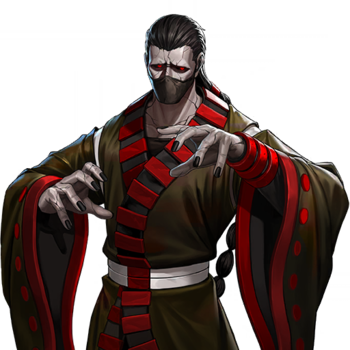 Voiced by: Takaya Kuroda
Former leader of the Hizoku clan. Ron is an ambitious man with a thirst for power. In order to fulfill said ambitions, he betrayed the Hizoku clan by killing several of their members and then disappearing without a trace. He joined NESTS at some point in time and assisted the Original Zero in fighting K's team. Ron escaped from the collapsing blimp and guided the falling satellite into the ocean. He then heads into hiding once again, yearning to obtain the mysterious "Dragon Power", held by Kensou and Bao. Surprisingly, Lin seems to have joined him for some reason. He has several children, including Duo Lon and Xiao Lon, the latter of which he considers a bastard daughter. 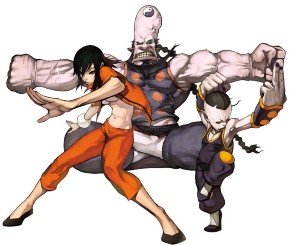 From L to R: Luan, Sai, Chat.
Voiced by: Yumi Kakazu (Luan and Chat), Takaya Kuroda (Sai)
Three top Hizoku assassins, who alongside Lin are known as the Four Devas of Hizoku. They were first introduced in KOF 2001 in one of Lin's win poses: Luan is the lone female, Chat is the young boy, and Sai is the big dude with an oddly-shaped head. As of recently, Sai and Chat have been missing; since Lin hasn't been around either, they might have joined Ron as well.