Characters / The King of Fighters XIV

Characters are listed in alphabetical order of last names. It should be noted that all the Chinese and Korean character names are rendered in the Western style (given name-surname rather than surname-given name). 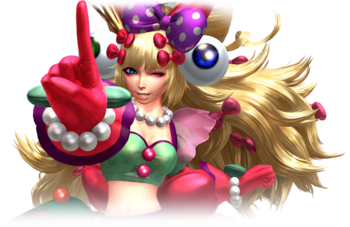 Profile
"My friends just saw what a good job I did! See?"
Voiced by: Mio
An eccentric woman who formerly worked for the NESTS organization, she was formally invited to the tournament after proving herself to be a serious threat in the underground fighting circuit.
Kukri - North Africa 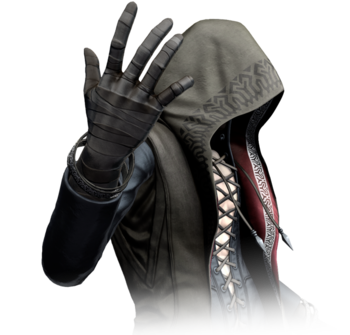 Profile
"Regret this while you're sinking in quicksand..."
Voiced by: Hiroki Takahashi
A mysterious fighter in a hood who fights with sand powers. Working from the shadows in a secret society, he is believed to have some connection to "Those From The Distant Land" and wears the signature arm bracelets that the group's members possess. His true identity is unknown.
Mian - China 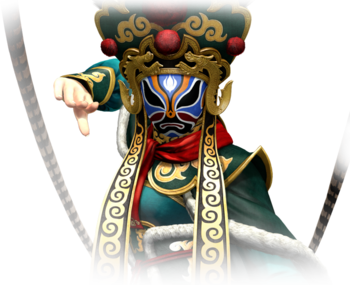 Profile
"The s-spectators... They're definitely more focused on the moment of my Bian Lian than the fight..."
Voiced by: AYUKA
Third member of the Official Invitation team. A woman fighter who battles using moves from the traditional Chinese dancing art Bian Lian. She fights in underground tournaments along with Sylvie. Despite her high dancing skills, Mian is an extremely shy person, and doesn't drop her mask often.
Advertisement: 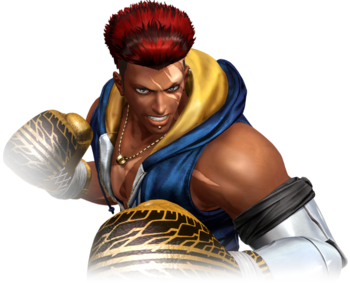 Profile
"If you go down that fast, you're not even as good as a punching bag."
Voiced by: Kengo Takanashi
This young boxing prodigy had lost an arm after a terrible accident, but has been able to quickly return to the ring thanks to a prosthesis based on the latest and most advanced robotics technology. He fights now in order to seize the world championship, while hoping every day his fiancée will awaken from a coma.
Zarina - Colombia 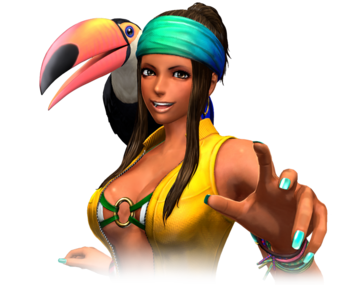 Profile
"I get lots of energy when this little one is watching me!"
Voiced by: Ayumi Fujimura
Third member of the South America team, Zarina is a smiling and cheerful woman fighter. Fond of samba dance, she uses her dancing skills to kick her opponents in rhythm. She fights hard to protect the nesting place of her toucan companion "Coco" whose species is facing the threat of extinction.
Bandeiras Hattori - Brazil 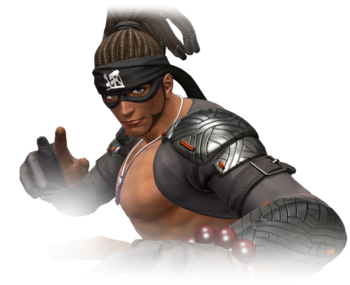 Profile
"Do you have an interest in disciplining yourself with Brazilian NINJUTSU?"
Voiced by: Eiji Miyashita
A South American ninja who uses the fighting style of Hanzo Hattori from Samurai Shodown. Founder of the Brazilian Ninja Arts school who joins the King of Fighters tournament in hopes of attracting students to his dojo. 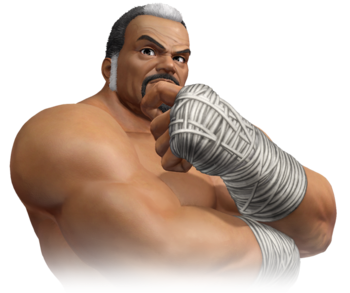 Profile
"If there's any way you can stop my steady advances, go ahead and try!"
Voiced by: Toshiya Fujisawa
Gang-Il is the chairman of the World Tae Kwon Do Federation, and Kim's master as well. His astonishing kicking techniques can break through any opponent guard. Always accompanied by a different woman each time he comes back from his travels, Gang-Il's personality is the complete opposite of Kim's.
Luong - Vietnam (?) 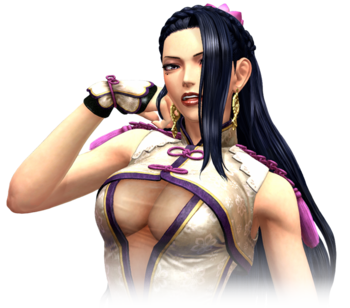 Profile
"You were knocked down too fast... If you don't last longer, I can't enjoy myself."
Voiced by: Chika Kino
Luong is a “femme fatal” type woman fighter with mysterious motivations. She will lacerate her enemies like a whip with her long legs and her arranged tae kwon do kicking techniques. Luong met Gang-Il during his world tour, and fell in love with him.
She returns in KOF XV as part of the Secret Agent Team along with Blue Mary and Vanessa. 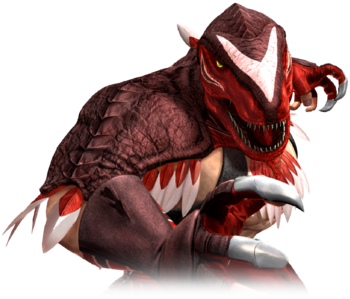 Profile
"Just win! That's what muscle is for! Strength is justice! Wait, justice? ....Aaaaah!!"
Voiced by: Hikaru Hanada
A newcomer for the Mexico Team in XIV, he's a dinosaur-themed luchador and a Heel. He is confirmed to be Tizoc; other characters recognize him, like Terry, and King of Dinosaurs himself can't help ranting about Justice for a bit in his winning quotes, then stopping himself realizing he is supposed to be a Heel now. His name is usually shortened to "Dinosaur". 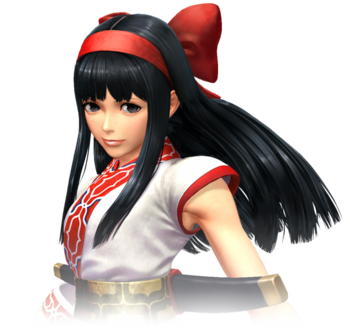 Profile
"This is nature's punishment."
Voiced by: Harumi Ikoma ('95, 2000), Mai Nakahara (XIV)
One of the stars of SNK's Samurai Shodown games, an Ainu priestess of Kamui Kotan and protector of Mother Nature, fighting alongside her pet hawk Mamahaha, although she was last seen becoming a spirit of nature. Joins the King of Fighters tournament as part of the "Another World" team alongside Mui Mui and Love Heart, apparently sensing a possible disturbance caused by a crack in space-time at her timeline and goes to the present day in order to investigate. Originally first seen in the Gameboy port of KOF 95, KOF XIV will be her first canon appearance in KOF.
Mui Mui - China 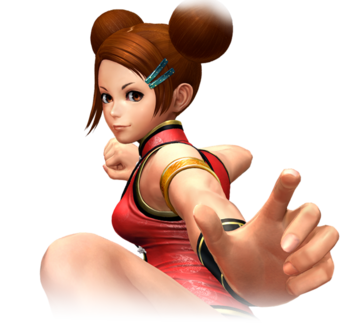 Profile
"I'm still descended from dragons! My true power will never lose!"
Voiced by: Namiko Otsu
Protagonist of the Dragon Gal pachislot games. Comes from ancient China and is the last successor of a clan of martial artists that has been gifted with dragon blood. How she ends up in the King of Fighters tournament is currently unknown, but she has a clear goal: to look for certain jewels that contain mysterious power.
Love Heart - Unknown 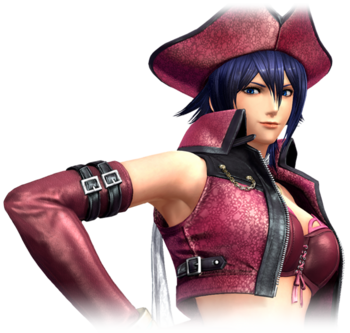 Profile
"This martial arts competition is more fun than I expected."
Voiced by: Toa Yukinari
Leader of the Peace Sky Pirates from SNK's Sky Love Pachinko games, a group of Sky Pirate defending the peace of the skies, inherited from her father Like Heart. How she ends up joining the King of Fighters tournament is as of yet unknown, but she's not really native to the King of Fighters world. 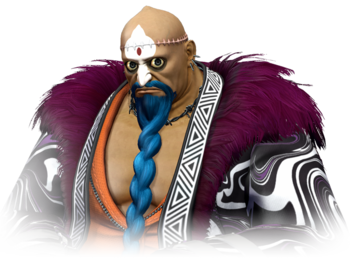 Profile
"Can you hear it? That apocalyptic timbre…"
Voiced by: Yuji Fujita
Leader of the "villain team" alongside Chang and Choi. He's a legendary criminal that was sealed in an underground jail before the events of the game, and somehow broke out. He has ideas and concepts hard to understand for the average person. Xanadu is considered as the "King of the Underground" by the other prisoners. Will he bring back Chang and Choi to their dark days again? 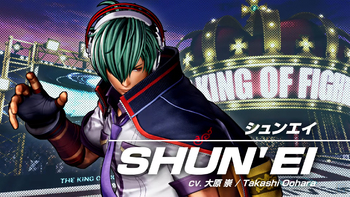 Profile
"Don't get up. I don't know if I can hold back anymore."
Voiced by: Takashi Ohara
The new protagonist of this storyline. In his childhood, his parents shunned him because of his strange powers; he then got taken under Tung Fu Rue's wing. Nowadays he decides to take on the challenge of the King of Fighters tournament along with his best friend Meitenkun.
Meitenkun - China 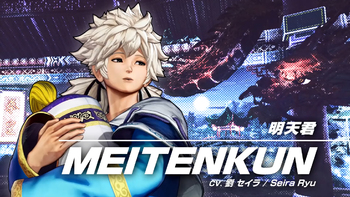 Profile
"Now I'll brush my teeth and continue my dream..."
Voiced by: Seira Ryu
Meitenkun is a sleepy young fighter who is always seen holding a pillow. Along with Shun'ei, he strove to train under the legendary Master Tung Fu Rue. His fighting style was named Hakkyokuminminken (Eight Extremities Sleepy Fist) by Tung. He conceals enough energy to earn himself the title of Tung's "secret weapon". 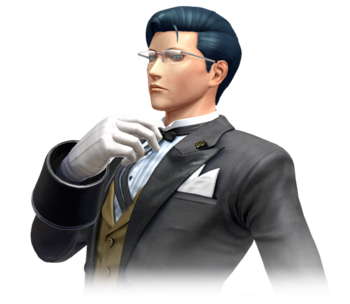 Profile
"You should first learn the proper etiquette to plead for your life."
Voiced by: Naoki Sagawa
Geese Howard's butler and bodyguard who joins him in the King of Fighters tournament. A member of the Howard Connection, he's generally very polite and well spoken, but has a sadistic side. 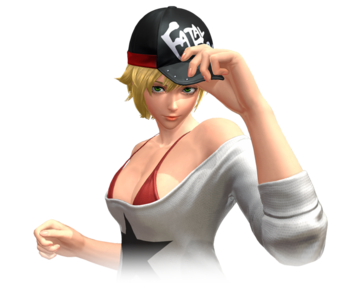 Profile
"I plan on getting even stronger, so be ready!"
Voiced by: Akino Hayashi
A new entrant on the Women Fighters team. Originally from a pachislot game called Garou Densetsu [Fatal Fury]: The Legend of the Wild Wolf. She's one of Terry's fans, in which her adoration caused her to emulate his and his team's fighting style, only to find out that she's quite decent at fighting. She is known for her cheerful and somewhat irresponsible personality. She ends up offering herself as the third member of the Women Fighters Team and impressed Mai Shiranui enough to let her in the team. 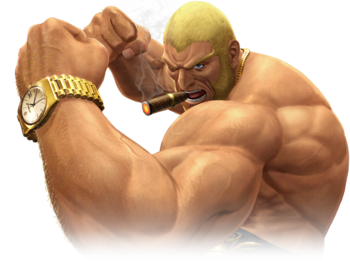 Profile
"Completely satisfied the viewers, and delivered a huge victory on top of that. That's why I'm the quintessential king!!"
Voiced by: Moriyuki Hishida
A mysterious billionaire who bought out all the rights to the King Of Fighters tournament. He claims to be the "first champion" of King of Fighters and is hosting the tournament this year.
The Final Boss - SPOILER CHARACTER 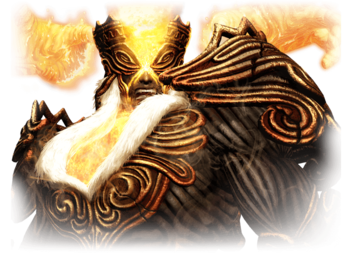 Profile
"VEEEEEEEEERRRRRRRSSE."
Voiced by: Yusaku
A mysterious entity that suddenly appears from the sky in the middle of the tournament, causing mass destruction around the arena.
Rock Howard - United States 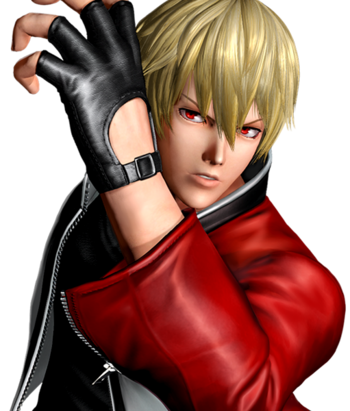 Profile
"I won't let destiny make me dance its tune!"
Voiced by: Eiji Takemoto (Japanese, MI), Yūma Uchida (Japanese, XIV), Ami Koshimizu (The King of Fighters: Destiny, young) Jon Thomas (Maximum Impact, English), Mike Lane (Maximum Impact 2, English)
The only son of Geese Howard. Rock was raised solely by his mother Marie, who cautioned him not to approach his father. Unfortunately, due to the loneliness suffered from Geese's neglect, Marie fell ill and passed away in Rock's care. Sometime later, Terry Bogard took Rock in his care and trained him. When Terry revealed the truth about his father, Rock charged at him in a rage, but got over it. He enters the Maximum Mayhem tournament held by Kain R. Heinlein to get answers regarding his mother, and may or may not have been tricked by Kain into working with him to uncover Geese's secret legacy. In Maximum Impact, Billy Kane is trying to get him to take over Geese's role as ruler of Southtown. Finally makes his main series debut as Downloadable Content in XIV.
Najd - Saudi Arabia 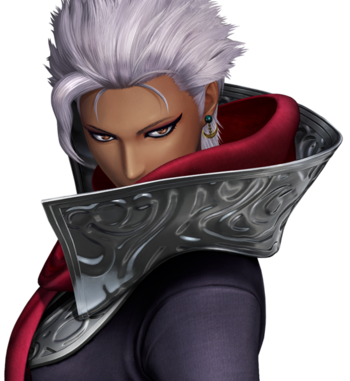 "I shall judge you myself"
Voiced by: Ayaka Fukuhara

Najd is a very quiet person dressed with an Abaya (traditional Saudi garment) with extraordinary powers. At night, she puts on her Abaya and turns into a vigilante to protect her fellow citizens. In contrast to her mysterious appearance, she is a college student during the day.
NPC

He is Antonov's assistant and associate director of the King Of Fighters tournament his boss is organizing. He was the one who helped scout fighters for Antonov's Official Invitation Team who consist of Sylvie, Mian, and Kukri.

The news reporter for AMBC. He covers the news during the King of Fighters tournament like your typical news reporter.

Voiced by: Rina Shikura (Boy A), Noriko Abe (Boy B)

Two young fans of Antonov, who express their concerns about their idol when he seemingly sacrifices himself to protect them.

The ring announcer for Antonov's King of Fighters tournament.