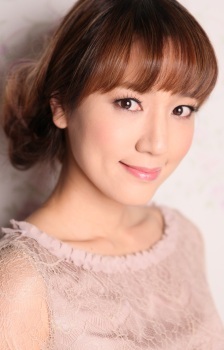 Haruna Ikezawa (池澤 春菜), born December 15, 1975, is a Japanese voice actress, born in Athens, Greece. She is of literature royalty; her father is an award-winning writer named Natsuki Ikezawa, and her grandpa Takehiko Fukunaga is also a known writer and critic.

Her roles seem to be mostly mysterious or the light-hearted, with the occasional Yandere (see Momoka in Sgt. Frog) thrown in. Along with fellow Keroro seiyuu Mamiko Noto, Ryō Hirohashi, and Chiwa Saito, she is a member of the seiyuu group More Peach Summer. She's also known for pack a really good Hot-Blooded scream in Japan, if her role as Aoi Hidaka in Dancougar Nova shows anything.

In addition to Japanese, she is fluent in Greek and is also known to speak English, Spanish and French.