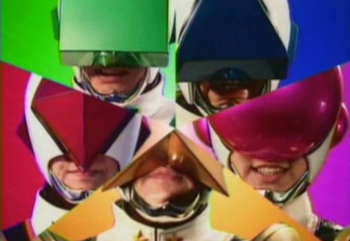 How do they see?
Advertisement:

Voicelugger is a Japanese tokusatsu that aired from January 12 to March 30, 1999. It was the last production by Shotaro Ishinomori, released posthumously, who intended for the series to be serious, while it was originally written to be a parody of older tokusatsu programs. The acting cast consisted of Japanese voice actors and popular singers of music in Japanese animation.