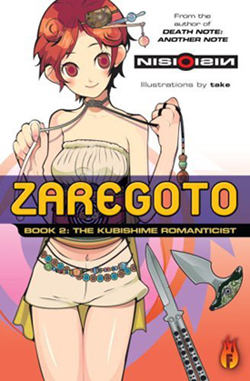 Zaregoto is a light novel series by the exceptionally prolific author, NisiOisiN. There are currently 9 novels total, with the first two being translated into English by Del Rey Manga. The series was later rescued by Vertical, but they have only published 3 novels. It has a spin-off series focusing on the Zerozaki family, the Ningen series, where 7 novels have been published. The author has also written some short stories about Aikawa Jun. A first collection has been published and the series concluded with five novels.

The series is narrated by the college student Ii-chan (or Ii-kun, or Ii-tan) as he tries his best to be a "passive observer" of the strange characters, mysteries, and inevitably, murders around him. The cast of the series is quite extensive, except most characters only appear or survive for a single novel. The only other frequent recurring characters are "The Blue Savant" Kunagisa Tomo, and "Humanity's Strongest" Aikawa Jun.

The Kubikiri Cycle ("The Beheading Cycle") introduces Ii-chan and Kunagisa as they are invited to the secluded Wet Crow's Feather Island for a gathering of geniuses. The island is owned by Akagami Iria, a wealthy disinherited heiress who has been living in exile on the island with her maids for the last five years. When one of the guests is found dead - decapitated - Iria decides to ask Aikawa Jun to solve the murder. But it will take several days before Jun will arrive, and Ii-chan decides to investigate the mystery while they wait.

The Kubishime Romanticist ("The Strangling Romanticist") takes place two weeks after the Kubikiri incident, at Rokumeikan Private University. While eating lunch in the university cafeteria, Ii-chan meets a girl named Aoii Mikoko, a friend he doesn't remember. She later invited him to her friend's birthday party for tomorrow, and with nothing better to do, he agrees. While buying birthday presents for tomorrow, he encounters the infamous serial killer of Kyoto Zerozaki Hitoshiki...The next day, Ii-chan and Mikoko arrives at her friend's apartment and with three other people including the host, they started the party. However, the morning after, the host is found strangled to death.

An OVA animated adaptation of the first novel has been released. The first two novels of the Ningen series were also adapted as manga. There is also a crossover gag manga series with Pretty Boy Detective Club and Monogatari Series as well.