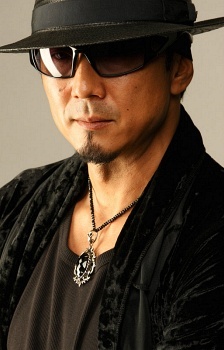 Bet you don't look this badass in shades.

Takaya Kuroda is a seiyu born on April 17, 1965. He's known for his astrigent and amorous bass voice, which makes him feel at home with Affably Evil roles. He had a similar voice range to the late Hirotaka Suzuoki, and he took the latter's role as Starscream in Transformers: Cybertron.

He gained a lot more widespread coverage thanks to his role as Kazuma Kiryu in the Yakuza series, and people get an idea on what he looks like, since he's also Kiryu's Ink-Suit Actor. He's ripped.