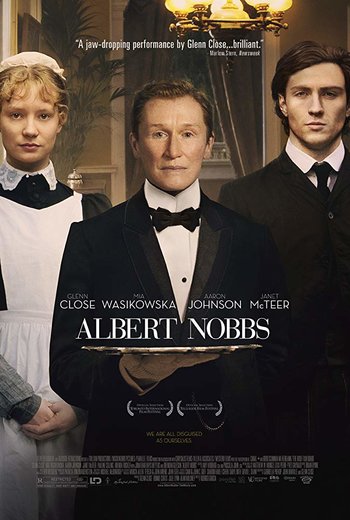 Albert Nobbs is a 2011 British-Irish drama film directed by Rodrigo García and starring Glenn Close. The screenplay, by Close, John Banville, and Gabriella Prekop, is based on a 1927 novella by George Moore, which had been earlier adapted as a play in which Close starred Off-Broadway in 1982.

Albert Nobbs (Close) is a butler at the Morrison Hotel in late-19th-century Dublin, Ireland. However, Albert guards a secret: While he has spent the last 30 years living as a man, he is biologically female. Albert's secret is discovered by Hubert Page (Janet McTeer), only for him to reveal to Albert that he is keeping the same secret about himself, living as a man after escaping an abusive husband. After seeing that Hubert lives happily with a wife, he decides to try something similar for himself by asking out maid Helen Dawes (Mia Wasikowska).