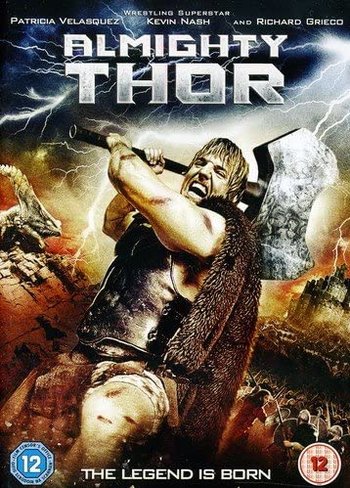 Wow, even the font is ripped off from the Marvel movie!
Advertisement:

Almighty Thor is a 2011 Mockbuster produced by The Asylum, directed by Christopher Ray, and starring Richard Grieco, Patricia Velasquez, Kevin Nash, Cody Deal, and Gerald Webb. Not to be confused with that other Thor movie that came out in 2011.

The story: Odin and his sons Thor and Balder are called to the cave of the Norns to learn Ragnarok is upon them and that Loki wants the Hammer of Invincibility to kick-start it. A bunch of Fight Scenes ensue, and then Odin hurls the Hammer of Invincibility away before Loki kills him. As Thor and a Valkyrie named Jarnsaxa race to retrieve the hammer, Loki is hot on their tails. The battle comes to a head in Midgard (a.k.a. Los Angeles) as Thor and Loki face off with the fate of the world in the balance.