Anime / The Wings of Rean 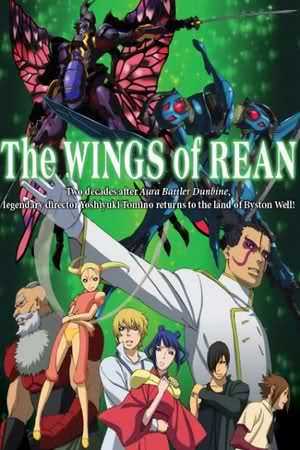 "The wings of Rean are with me!"
Advertisement:

A six episode, Original interNet Animation (ONA) spin-off of Aura Battler Dunbine, Yoshiyuki Tomino's The Wings of Rean (Rean no Tsubasa) revisits the world of Byston Well, as well as the original series' themes of "war is hell" and "hate only breeds more hate", while telling a tale of giant robot insects kicking the snot out of each other.

The story kicks off with Ordinary College Student Asap Suzuki being called upon by a couple of his pals (who are STRONGLY opposed to America's military presence in Japan) to help them steal weaponry from a military base where Asap's father is stationed. Although reluctant, Asap is eventually coerced, and his pals proceed to steal a rocket-propelled grenade launcher, which they then fire upon the American naval fleet also stationed at the base. When all hell breaks loose, otherworldly battleships suddenly appear in Tokyo Bay, bringing with them a host of insectlike Humongous Mecha, and a girl wearing a pair of special boots which sprout the titular Wings of Rean.

The girl, Lyukusu Sakomizu, is a princess from the kingdom of Hojo in the land of Byston Well, who, in an attempt to aid La Résistance against her father, king Shinjirou Sakomizu, stole the boots of the wings of Rean, which allow their chosen wearer to open up the Aura Road and travel between worlds. The second that she asks Asap for his help, however, Sakomizu's army arrives, chasing after La Résistance, and Asap and his friends are dragged along when both forces return to Byston Well.

Trapped in Another World, Asap finds that the boots have chosen him as their new bearer, and is labeled a "Holy Warrior" by Sakomizu. Sakomizu himself was a World War II kamikaze pilot who witnessed the nuclear bombing of Hiroshima and was flung into Byston Well where he had become The Chosen One, fought a Humongous Mecha war, and wound up king of his very own country. However, Sakomizu is now obsessed with returning to the surface world, and upon doing so, is unable to bear the sight of Tokyo as it is today — covered in concrete and steel, and being influenced by the Americans who destroyed his hometown.

Asap, having accquired the Aura Battler Nanajin by stealing it from Sakomizu's forces, must now find a way to prevent Sakomizu from nuking Tokyo to wash away its western influence, as well as stopping Sakomizu's treacherous wife, Codorre from joining up with the local General Ripper and attempting to Take Over the World.