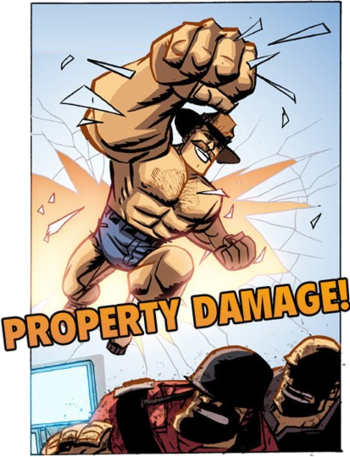 If Saxton Hale says that "PROPERTY DAMAGE" is a sound effect, you damn well better not question it.
"I don't know how flinging someone actually made the sound 'fling'."
— The Spoony One (reviewing Warrior), The Spoony Experiment
Advertisement:

Or, if you will, "Unomatopoeia."

In comics and shows emulating comics, we'll see words which indicate the action taking place. "Bash!" and "Kick!", for example, just happen to sound a bit like the impacts they're describing. They are almost, but not quite Written Sound Effects. Some authors will just bypass the whole "sounds like" thing and use words for the action in loud capital letters. "Glare!" "Leap!" "Flourish!" and even "Idea!"

This is the Unsound Effect. It's a humorous technique, although it is also seen in fight scenes. ("Block!" "Slash!")

This is usually attributed to Richie Rich in the original Harvey Comics versions, which lasted from the 1950s to the 1980s. They included such effects as "BOUNCE!" for large rubber balls impacting a hard surface, and went on to "EXPAND!" when Richie utilized one of Prof. Keenbean's Applied Phlebotinum devices meant to go from pocket-size miniature tool/vehicle/etc. to full-size.

It's worth noting that manga has different conventions regarding onomatopoeia. Manga has much more that can be done with an Unsound Effect. Japanese writers will use sound effects to denote sounds, like heartbeats or door slams, but also to represent more abstract events like "smiling" ("niko niko", or just "ni!", or extended to "nikkori"), "sudden realization" ("ha"), "the sound of silence" ("shiiiiiiin"), "a menacing atmosphere" ("gogogo"), "the sound of staring" ("jiiiiiiiiii") or even "the sound of blushing" ("kaaaaa"). These are known as phenomimes when they describe external phenomena and psychomimes when they describe psychological states (both can be referred to in Japanese as gitaigo, lit. "mimetic words", since they mimetize such cases). Some anime, generally the more surreal sort, turn these into actual sound effects, even if said sound effects are just the character saying the sound effect (like, for example, the character will actually say "jiiiiiiii" when staring at somebody).

And sometimes, the unsound effect isn't even written. A Super-Deformed version of the character in the margin, a mascot, an animal, or other living thing in the background will say or represent the character's feelings.

Related to Editorial Synaesthesia. See also Visible Silence, the Unsound Effect for no sound; and Sound Defect for real sounds that go wrong. When this occurs in-universe it's Saying Sound Effects Out Loud.