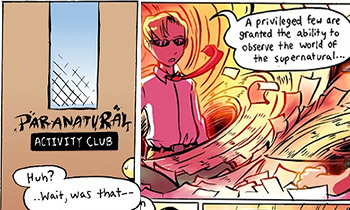 Wake up, go to school, join a club, save the world.

We all know School Clubs Are Serious Business. However, some high school settings have those that take it a step further. Though they pose as regular clubs, they actually exist as a coverup for some extracurricular activity that is usually supernaturally-oriented.

The members will often be ordinary high school students that are the only ones equipped to investigate and battle some shadowy threat, and a school club presents the perfect story to keep up The Masquerade. They can take advantage of funding, equipment and gathering after school without unfortunate questions arising.

The club advisor will either be a non-existant figurehead or a grown-up who supports the students from behind the scenes because he is unable to interfere directly. Commonly found in an Academy of Adventure.