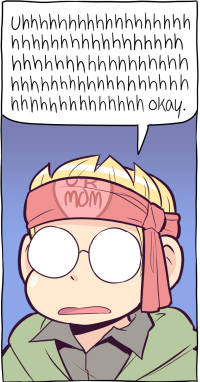 Speech disfluency is often times a break or (in music terms) a rest between the flow of speech. These include fillers such as "like", "so," and "uh", or in Japanese, "anou" and "eto". These fillers are often exaggerated as a heavily exaggerated form of Overly-Long Gag.
Advertisement:

Basically, say a character tells another character, who's not the sharpest tool in the shed, something, they take a while going 'uhhhhhhhhhh...', or repeatedly filling "like" between words worth more than a Valley Girl could. Reasons can include things such as evading a question, or they're dumbfounded; sometimes they weren't listening to the question, sometimes they're confused, or sometimes utter this when they're given multiple choices; or sometimes it emphasizes how a total ditz the character is. And those fillers take seconds and it stays there rather that keeping an awkward silence.

Sometimes they say something, or they may change the subject instead. Sometimes, the overly long filler sound can also be an expression of exhaustion. And sometimes, in a romance scene, the love confessor can utter this, only for the confessee to silence them by reciprocating that filler.

Often paired with a Simpleton Voice, but not always. Can also be uttered by The Ditherer, whether they're a ditz or not .

After Squidward suggests for Patrick to order a Krabby Patty, Squidward asks him "for here or to go?" When Patrick utters a stupidly long "uhhh..." Squidward slams the cash register.

After Squidward suggests for Patrick to order a Krabby Patty, Squidward asks him "for here or to go?" When Patrick utters a stupidly long "uhhh..." Squidward slams the cash register.