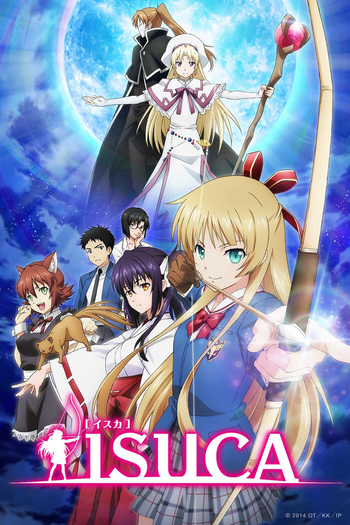 Isuca is a Japanese action manga series by Osamu Takahashi. It has been adapted into an anime, which started airing as part of the Winter 2015 Anime season.

Shinichirō Asano is a high school student and the son of a traveling stage magician and his assistant; since they rarely send living expenses home, he desperately needs money. He gets a job as a housekeeper to the Shimazu family in order to pay his rent. There he meets Sakuya Shimazu, the 37th head of the family who is tasked with capturing and sealing away monsters. Shinichirō later becomes her ally to hunt down the monsters who have come to our world.

Though initially ignorant of the supernatural and unaccustomed to combat, Shinichirō soon proves very useful to Sakuya. Any time his mouth touches a monster or a person with supernatural powers, he learns that being's True Name, without which a monster can only be sealed but not truly banished. A being cannot disobey the first person to speak its true name, making Shinichirō an incredibly valuable asset in battle.

An anime adaptation is airing as part of the Winter 2015 Anime season. Crunchyroll is streaming the series on its website, which can be viewed here

for people in the following areas:note  United States (and its territories), Canada, Central and South America (including the Caribbean), United Kingdom and Ireland, Europe (excluding German-speaking territories), South Africa, the Middle East and North Africa.