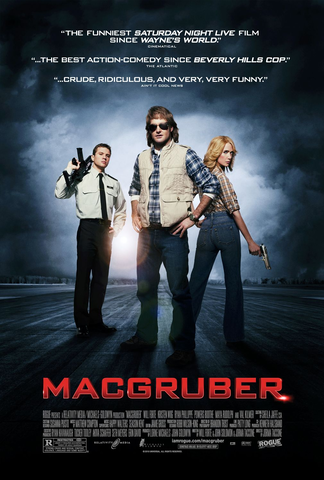 MacGruber is an Affectionate Parody of MacGyver originating on Saturday Night Live. The title character MacGruber (played by Will Forte), is (supposedly) a Special Ops agent versed in the most deadly forms of everything, the most infamous being his ability (or inability) to deactivate deadly explosives. This makes him somewhat of an Idiot Hero, who is ironically lauded for his expertise and viewed as a skillful agent, yet his bumbling goes unnoticed by some, including himself. Most sketches involve him being locked in a room (pretty much the exact same room each time) with some sort of explosive, his female assistant (originally Casey, played by Maya Rudolph; later Vicki, played by Kristen Wiig), and a strange assortment of tools and items. He happens to be able to use them to deactivate the bomb, but something personal always comes up to distract him before he can.

There is usually a third person in the about-to-explode room, making the sketches rather more interesting. Richard Dean Anderson himself was once said third person; apparently, MacGyver is MacGruber's dad. Hm.

Anyway, the sketch was sufficiently successful that it got its own theatrical-release movie

in 2010, with Val Kilmer as the villain and Ryan Phillippe as his Hypercompetent Sidekick.

On August 10, 2020, Peacock ordered a TV series sequel to the movie. Forte, Wiig, and Phillippe reprise their roles with Laurence Fishburne, Sam Elliott, and Billy Zane joining the cast. The series premiered on December 16th, 2021. The teaser can be seen here

Tropes used in the SNL sketch:

Tropes used in The Movie:

MACGRUBER! He made a fucking movie! MACGRUBER!