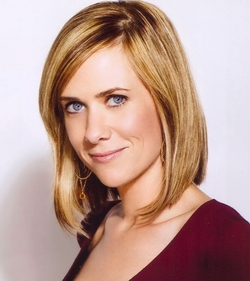 Kristen Carroll Wiig (born August 22, 1973 in Canandaigua, New York) is an American actress, comedian, and screenwriter in film and television.

She first rose to fame as a cast member of Saturday Night Live, in which she remained from 2005 to 2012. Much like Bill Hader, Wiig was known for her insane recurring characters and memorably spot-on celebrity impressions. A complete list can be found here