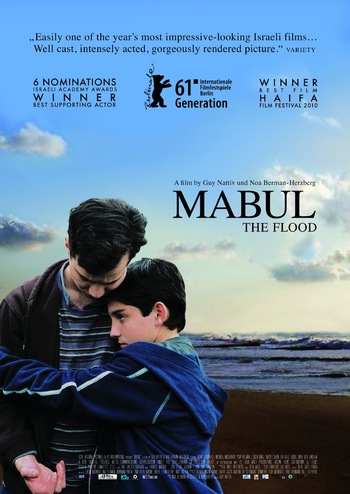 Mabul (The Flood) is an Israeli drama film expanded from the 2002 short film of the same name, first shown at the Haifa Film Festival in 2010 and released in 2011, written by Noa Berman-Herzberg and Guy Nattiv and directed by Nattiv.
Advertisement:

Yoni Roshko (Yoav Rotman) is a boy living in a small seaside moshav. Desperate to grow up, he does his classmates' homework so he can spend their money on a bodybuilding powder, stretches with weights tied to his legs, and screams into the wind to thicken his voice. He struggles to memorize his portion of The Torah on time for his upcoming Bar Mitzvah. His small size makes him an easy target for bullies, and his distant, irresponsible parents, Miri (Ronit Elkabetz) and Gidi (Tzahi Grad), are no help. Then the institution that housed his 17-year-old autistic brother Tomer (Michael Moshonov) is shut down, and Tomer is sent to live with his family until a new place can be found.