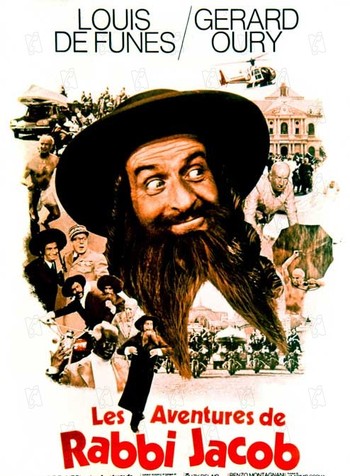 Les Aventures de Rabbi Jacob (The Mad Adventures of Rabbi Jacob), often shortened to Rabbi Jacob, is a 1973 French comedy directed by Gérard Oury. It stars Louis de Funès in one of his most famous roles.

Jacob (Marcel Dalio) is a beloved rabbi from New York who has lived there for 30 years. One day, the French side of his family, the Schmolls, invite him to preside over the Bar Mitzvah of his young nephew David. Jacob boards a plane to leave America for his birthland of France, and his young friend Rabbi Samuel comes with him.

Meanwhile in France, Victor Pivert (De Funès), a chauvinistic, bad-tempered and slightly xenophobic businessman, is on the way to his daughter's wedding. He and his driver, Salomon (Henri Guybet), have a car accident in which Pivert's car (carrying a speed boat) flips upside-down into a lake. When Salomon, who is Jewish, refuses to help because Shabbat has just begun, Pivert fires him, much to Salomon's content. As Pivert goes to find assistance in an empty bubblegum factory, he involuntarily helps Mohammed Larbi Slimane (Claude Giraud), an Arab revolutionist leader, to escape a group of Secret Police agents from the regime he fights against, who are led by Farès (Renzo Montagnani).

Now on the run from both Farès and the French police, Pivert and Slimane bound and gag two rabbis at the very airport Jacob is awaited to by the Schmoll family and take their clothes to disguise. Pivert is then mistaken for Jacob by the Schmolls, and brought into the Jewish community in Paris. Hilarity Ensues.

The film earned a nomination at the 1975 Golden Globe Award for Best Foreign Language Motion Picture.

The Mad Adventures of Rabbi Jacob provides examples of:

That was a sorta Author Tract from the Jewish director Gérard Oury when the movie came out during the Yom Kippur War.