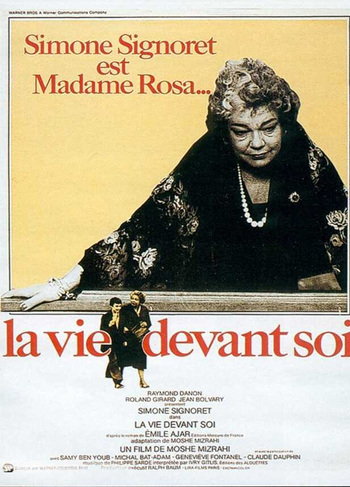 Madame Rosa (Signoret) is an ex-prostitute now in her sixties. She is Jewish, and when she was younger she was an inmate at Auschwitz. She was still servicing clients when she was north of 50, but eventually she had to quit, and now she has a little orphanage/day care center business that she runs out of her apartment. She specializes in taking in the children of working prostitutes.

Momo is her oldest charge, although he's still a boy. Madame Rosa tells him that he's only 11, although he appears to be older. No one has ever shown up for Momo since he was dropped off at Madame Rosa's years ago, and at some point the money orders paying for his upkeep stopped coming, but he stays with Madame Rosa anyway. Momo is fiercely loyal to his substitute mother. When Madame Rosa's health starts to rapidly decline, Momo becomes her protector.