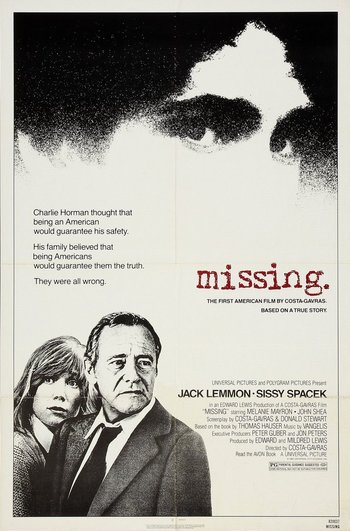 Missing (stylized onscreen as missing.) is a 1982 drama film directed by Costa-Gavras, starring Jack Lemmon and Sissy Spacek, with a soundtrack by Vangelis. It depicts the 1973 overthrow of Chilean President Salvador Allende's democratically-elected government by Augusto Pinochet's far-right military junta, and its bloody aftermath.

Journalist Charlie Horman (John Shea) and his wife Beth (Spacek) are a young American couple who have settled in Chile. They find themselves caught up in the country's political situation but, confident in their status as expatriate U.S. citizens, don't expect anything to happen to them. This hope turns out to be misplaced when Charlie goes missing. Seeking to find out what happened to him, Beth gets in touch with Charlie's businessman father, Ed (Lemmon), who comes over to assist her. Although they initially find it difficult to get along due to generational and ideological differences, their investigation draws them closer, as they discover that Charlie was "disappeared" by the junta because he had accidentally overheard sensitive information about the CIA's involvement in the coup.

See here for other works with this title.