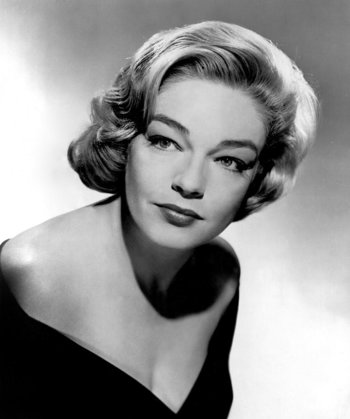 She was born Simone Kaminker, in Germany—her father was an interpreter who worked at the League of Nations. As a child her family moved to Paris, where she grew up. She made her film debut in Nazi-occupied France in 1942, even after her father had left to join De Gaulle and the Free French in 1940. (She chose her mother's maiden name of "Signoret" to hide her Jewish ancestry in Vichy France.)

Her career continued to prosper after the liberation. In 1950 she got a lot of attention for her performance in ensemble film La Ronde. She starred in 1954 thriller Les Diaboliques, one of the most famous French movies of the decade. Fluent in English, she starred in British film Room at the Top in 1959 and won an Oscar for Best Actress. Despite this promising start she only dabbled in English-language cinema, appearing in Is Paris Burning and Ship of Fools. As she aged out of lead parts she went back to France, having a late career triumph as an ex-madam running a day care center in Madame Rosa.

Her stage work included a well-received turn in The Little Foxes and a poorly-received turn in Macbeth opposite Alec Guinness. She was married to actor Yves Montand from 1951 until her death. Her memoir was titled, believe it or not, Nostalgia Isn't What It Used to Be. Both Signoret and Montand are buried in the same grave at the Père Lachaise cemetery in Paris.