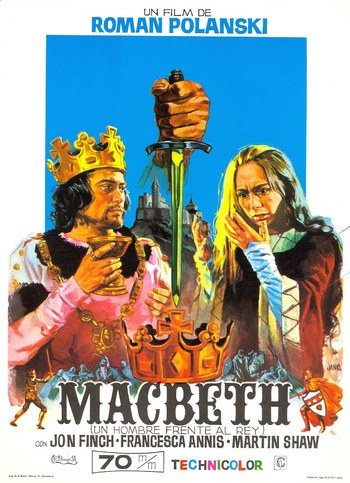 Macbeth is a 1971 film by Roman Polański.

The seed of ambition is planted in Macbeth's head, and he really gets excited when he and Banquo meet King Duncan of Scotland and Duncan grants Macbeth the title of Thane of Cawdor. When he tells his wife Lady Macbeth (Francesca Annis) of this news, she immediately goads him into murdering King Duncan and taking the throne, thus fulfilling the third witch's prophecy.

This film is a pretty faithful adaptation of Macbeth so most of the tropes found on that page also apply to this film. This was the first film Roman Polanski made after his wife Sharon Tate, their unborn baby, and four other people were slaughtered at Tate and Polanski's home by the Manson Family. It was produced by Hugh Hefner and Playboy Productions, as part of a short-lived effort by Hefner to break into the movie business.