Recap / Tintin - Tintin in the Land of the Soviets 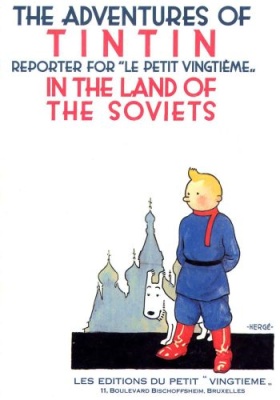 Tintin in the Land of the Soviets is the first Tintin story, published in the magazine Le Petit Vingtième in the years 1929 and 1930. The young reporter Tintin and his dog Snowy are sent by the newspaper to the Soviet Union to gather material to write articles about the conditions under the Bolshevik government. What follows is a long tirade of anti-communist propaganda: Tintin wanders around Russia uncovering the oppression and the dirty secrets of the government while being attacked by evil government officials every step of the way.

As you can imagine, research for this story was minimal; Hergé had only one written source for information when writing it. Hergé himself would later think of the story as his Old Shame.

By the time of World War II, Herge had effectively disowned the book and refused to allow its reissue when he began redrawing the books in colour. As such Tintin in the Land of the Soviets is the only book in the series that was never redrawn, and only got a colourised version in 2017. As a result, it sticks out like a sore thumb if you're otherwise only familiar with the later, redrawn versions of Tintin's early adventures.