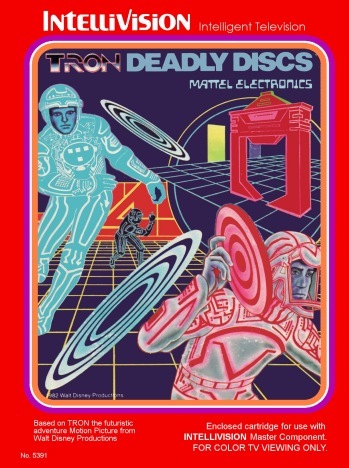 TRON Deadly Discs is a 1982 video game based on Disney's film TRON that was developed by Mattel Electronics for the Atari 2600, the Intellivision, and the Aquarius home computer. It was re-released for the Atari 2600 as just Deadly Discs by TeleGames USA in the late 1980s when the movie license had expired, and is currently available for the Atari 5200 under the title Intellidiscs. It consists of Tron trying to stay alive for as long as possible while fighting against the warriors of the MCP that are sent to derez him in combat.
Advertisement:

A homebrew sequel game, TRON: Back to the Grid

, has been developed in 2017 but was never released.

Has nothing to do with Discs Of TRON, Bally/Midway's sequel to the arcade game TRON.