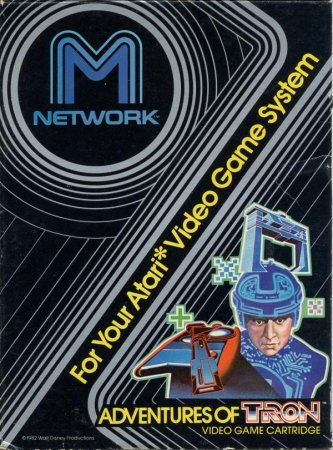 Adventures of TRON is a 1982 video game for the Atari 2600 that is based on Disney's 1982 movie TRON, published by Mattel Electronics. It was re-released as Adventures on GX-12 by TeleGames USA in the late 1980s when the movie license had expired.
Advertisement:

In this game you play Tron, who must collect seven bits floating around on four levels while escaping Recognizers, Game Tanks, and Grid Bugs. To travel between floors, Tron must jump across the gap in the center and touch the Input/Output Tower beam to activate a lift that will raise him up one level. To drop down a level, the player only needs to pull back on the control stick. A Solar Sailer appears on the third floor to allow the player to travel across the screen, which is useful in cases where you need to get over some Recgonizers and tanks. Once you collect all seven bits, the Input/Output Tower beam activates, allowing you to transfer from that screen onto the next screen, where you do the same thing all over again.