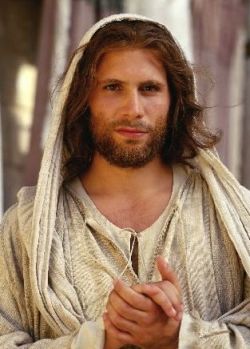 Jesus is a 1999 Made-for-TV Movie or Miniseries, originally broadcast in two parts, about the life of Jesus from The Bible. It stars Jeremy Sisto as Jesus, Gary Oldman as Pontius Pilate, Debra Messing as Mary Magdalene, and Jacqueline Bisset as Mary the mother of Jesus. Sean Harris, in an early-career appearance, plays Thomas the Apostle.
Advertisement:

Its narrative combines and condenses The Four Gospels and expands upon several details like Jesus's human characterization and the socio-political context of the time.

It has been called a "kosher" counterpart of The Last Temptation of Christ due to its similar focus on the humanity of Jesus, while still being more orthodox in doctrinal matters.