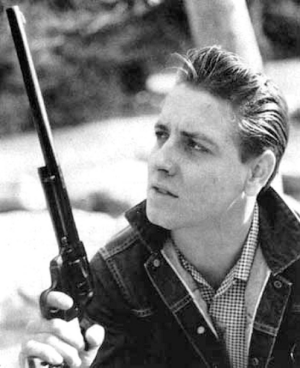 Ray Edward "Eddie" Cochran (October 3, 1938 – April 17, 1960) was an American singer, songwriter and guitarist. He is considered one of the most influential Rock & Roll artists of the late '50s alongside Buddy Holly and Elvis Presley, among others. Of particular note was his skillful guitar playing, and his pioneering use of studio techniques such as overdubbing. Lyrically, Cochran's material was typically more rebellious than his contemporaries; his most well-known songs typically deal with problematic teenage love, and the acceptance (or rejection) of the responsibilities of adulthood. Cochran was killed in an automobile accident in 1960; his co-passengers, artistic colleague Gene Vincent and Cochran's fiancee Sharon Sheeley, survived.

Cochran is not as well remembered as his contemporaries, which is often attributed to the briefness of his career and his small number of chart hits. Nevertheless, Cochran had a profound influence on some of the greatest artists of the '60s such as The Beatles, The Rolling Stones, and The Who; indeed, Cochran's "Twenty Flight Rock" was the very song a young Paul McCartney played for John Lennon to audition for his first group, The Quarrymen. His rough, bass-driven singles such as "Summertime Blues", "C'mon Everybody", and "Somethin' Else", are often cited as being a heavy influence on punk music, leading certain punk luminaries to dub Cochran the "Grandfather of Punk Rock". Sid Vicious, for instance, covered Cochran's "Something Else" on his solo album Sid Sings (1979).